Women in Art, nominated by Friends of The Wilson

At a time when it was almost impossible for a woman to get formal training as an artist, Cassatt overcame resistance from her family and moved from Pennsylvania to Paris to continue her studies. After struggling to break into the established art world, she was invited to join the Impressionists in their independent exhibitions and embraced their controversial approach to painting. Financially privileged and gifted as a painter, she worked to break down barriers and extend options for all women in art, politics and life. Her pictures bring a gentle, loving perspective to domestic scenes and images of motherhood.

Frida Kahlo drew on the folk traditions of her native Mexico, imagery from her Catholic upbringing, and her own experiences as a survivor of two major traumas

— childhood polio and an accident as a teenager that left her with chronic pain. In presenting herself both as a suffering individual and a product of her culture, and in exploring an identity both multifaceted and marginalised, she took a radically new approach to self-portraiture. Beautiful and thought-provoking, her paintings are also emblematic of the way art opened up during the twentieth century.

Berthe Morisot (1841 -1895) was, through talent and determination, an important and respected member of `The Impressionists` in her own day.  In comfortable circumstances, she was able to secure a motivational art teacher and then fortunate to meet Edouard Manet, joining his artistic circle, (Pissarro, Degas, Cezanne, Monet and Renoir) and regularly exhibiting with them.   Morisot was driven by her art and worked relentlessly – so when she married Eugene Manet (brother of Edouard) she chose someone who recognised her talent and passion. Unfortunately, history has unfairly relegated her to a secondary member of the Impressionist movement – though recent increase of interest and a Paris exhibition have in some part redressed the balance.   A good collection of her works can be seen at the Musée Marmottan in Paris.

I’d like to nominate Paula Rego.  Her paintings always draw me in, their sinister undertones

The Policeman’s Daughter is my favourite, the night-time cleaning of the boots evoking a fearsome oppressiveness whilst giving nothing away.  I never grow tired of looking at it.

I could have gone for someone more obvious like Artemisia Gentileschi whose powerful works I adore or the magical & surreal Leonora Carrington; instead I’m choosing someone from the Wilson’s collection who was more local, having been born in Bristol. Barbara Gay had so little sight that she had to forsake painting because of her lack of vision from the age of eighteen. She studied at the Royal West of England Academy. She could hold small pieces of clay very close to her eyes whilst forming them to then cast exquisite little tableaux in porcelain. The tableau in the Wilson’s collection is inspired by the Lady and the Unicorn tapestries in Musée Cluny, Paris. Barbara was a descendent of Edward VII and her family received regular payments from the crown. This plaster frieze is based on Chaucer’s Canterbury Tales. 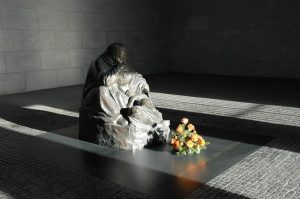 No one better represents the moral conscience of post-war Germany than Käthe Kollwitz (1867-1945). Her lithographs and sculptures of poverty, oppression and suffering, declaring unflinchingly Nie Wieder Krieg, (War never again) led Hitler to ban her work in the 1930s.

The New Guardhouse (1816), on Berlin’s Unter den Linden, which the East German regime appropriated as a memorial to the victims of ‘Faschismus und Militarismus’ is now (post-reunification) the German Federal Republic’s ‘Central Memorial to the Victims of War and Tyranny’. And in the middle of this sombre space sits an enlarged version of one of Kollwitz’s most eloquent sculptures, a Pietà for our times.