Friends of The Wilson are proud to announce the appointment of two distinguished patrons.

Dr David Wilson is the great-nephew of Dr Edward Adrian Wilson (1872-1912), the polar explorer, natural historian and painter who died with Captain Scott and his party on their return from the South Pole; and the great-grandson of Edward Thomas Wilson, who helped to found Cheltenham’s Art Gallery and Museum, and performed the official opening ceremony in 1907. It was in honour of these two remarkable men that the Art Gallery and Museum was re-named The Wilson in 2013.

David Wilson is himself a noted polar historian and author with a wide range of ornithological and natural history interests. He is a popular lecturer on seabird ornithology and a Fellow of the Zoological Society of London.  He has served as Chairman of the Friends of the Scott Polar Research Institute at the University of Cambridge and was the National Co-ordinator for the Captain Scott Centenary. We are absolutely delighted that he has agreed to become a patron of the Friends. 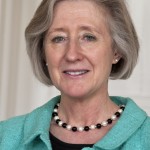 We are also privileged that Margaret Austen has agreed to join us as a patron. Margaret is a solicitor specialising in charity law and is managing partner of Willans LLP. She is a Trustee of the Friends of Gloucester Cathedral; Honorary Company Secretary to Cheltenham Festivals; and Honorary Solicitor to the Holst Birthplace Museum. She has been a trustee of the Cheltenham Art Gallery & Museum Development Trust and other local charities. She has been one of our most stalwart supporters and we are honoured to welcome her as a patron