With the Forest of Dean on our doorstep most of us are aware of its history as a Royal Forest and its connections with charcoal production and mining. However, the role of the Verderer, both historical and current, is less well known. Verderers for the Forest of Dean are still elected in a process used for at least 7 centuries. 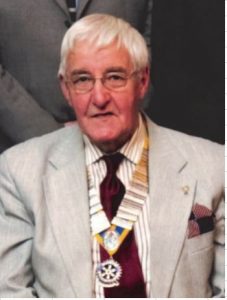 The office started in the 12th century when British monarchs created Royal Forests: woodlands set aside for the Crown’s purposes – hunting and preservation of their forests. By the 15th and 16th centuries, the forest law was in decline and control was difficult. By the early 17th century there was a marked trend to charcoal production associated with the iron industry which caused wide-scale deforestation, in turn causing the ancient regime of forest officials to resume prominence.

The preservation of the vert and venison continued to be the traditional duties, but by 1855 all deer had been removed from the Forest as they were believed to foster bad and idle habits among some of the inhabitants! Deer did not return to the Forest until the 1940s. Encroachments continued to be the main business of the court into the 20th century.

Our speaker Maurice Bent was elected a Verderer for life in 2009. He is a local historian and author of four books: Highest Point of Dean, The Last Deep Mine of Dean, and Volumes 1 and 2 of The Musical Tradition of Dean. He has been an organist since the age of 18 and an organ builder. He is also founder of the Royal Forest of Dean Herbert Howells Society.

If you have any questions, please email events@friendsofthewilson.org.uk or ring Alison on 01242 519413.

Otherwise book your place by 17th June by using the form below.

There are three payment options:

1. You can pay by credit or debit card, as well as by PayPal, using the PayPal option (default).  If there are sufficient spaces still available this will automatically confirm your booking if the payment is accepted.

2. If you want to pay by cheque select the Off-line option from the payment methods but please send your cheque as soon as possible as your booking will not be confirmed until we have received the payment.

3. If you really don’t like filling in forms on-screen you can download a form, print it and post it with a cheque. A booking form can also be found in the Friends Newsletter (available May 2018).

Cheques should be payable to Friends of The Wilson and sent with a sae or clearly written email address to Mrs Alison Pascoe, 77 Naunton Lane, Cheltenham, GL53 7AZ.

Bookings are now closed for this event.