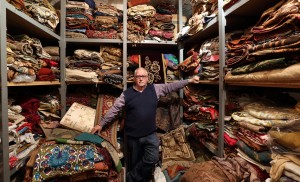 We hope as many of you as possible will attend our AGM on Tuesday 23 June at 18:00 with formal business beginning at 18:15.. Our guest speaker will be Paul Reeves, who has been called “the world’s leading dealer in the finest objects of the Arts and Crafts Movement”.  Paul has agreed to do an “in conversation” session about his fascinating career.

Paul’s career began in fashion. In the Sixties he was a designer and retailer whose flamboyant clothes were bought by Paul McCartney, The Rolling Stones, Jimi Hendrix, The Who and David Bowie. His garments are now much sought after as collectors’ items and have found their way into exhibitions at the V&A and the Museum of London.

It was a handful of his music-industry clients that encouraged Paul on the path to antiques dealing and interior design. In 1973, Peter Grant, the manager of Led Zeppelin, asked Paul to help him refurbish his home. During the following 18 months, Paul sourced everything from curtain material to cutlery, discovering a talent for interior design and a love of beautifully made British furniture and textiles. In 1976 he opened his first antiques shop in Battersea Bridge Road, dealing in objects from the 19th and 20th centuries, and in 1981 moved to Kensington Church Street, building up a client list that included Bob Dylan, James Taylor, Barbra Streisand, George Harrison, Gary Kemp, Brad Pitt and Roger Daltrey. One of his most passionate collectors of 19th century textiles was Led Zeppelin’s guitarist, Jimmy Page.

Now based in Cirencester, Paul continues to sell items produced by the leading architects and designers of late nineteenth and early twentieth century Britain to private collectors and museums. He has found and sold many major works from the period which had been previously thought to be lost. Works by A.W.N. and E.W. Pugin, Alfred Waterhouse, William Morris, Phillip Webb, Walter Crane, A.H Mackmurdo, Ernest Gimson, Sidney and Edward Barnsley, M.H. Baillie Scott, C.R. Mackintosh, Edwin Lutyens, C.F.A. Voysey and other luminaries of the Arts and Crafts movement regularly pass through his hands.

Items that he has sold can be seen in The British Museum, The Victoria and Albert Museum, and, of course, The Wilson.