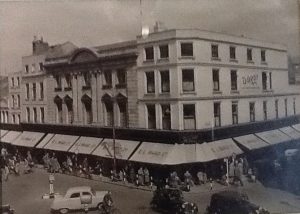 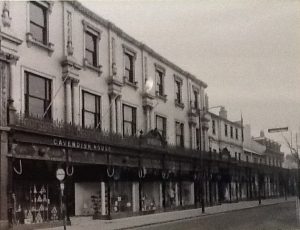 In the Open Archive (formerly knows as the Paper Store) there are three drawers with photos and documents from two shops in Cheltenham that are either no longer there or greatly changed but which stir memories for me.

Wards, where, as a school boy in the 50s, I remember going down to the basement where the toy department used to be, down a twisting dark wooden staircase to the right of the entrance, to see a snake charmer. During her show she gave me a small piece of dry shed snake skin. I have no idea why she was there apart from as an attraction to get people into the shop.

The second is Cavendish House. I had a summer job there in the early 60’s in the shoe department on the ground floor, where the perfumes are now. In my first week I was reprimanded by the store manager during his weekly inspection for wearing brown shoes during the day whilst on duty. I only got away with it, with a sad shake of his head, because I was not permanent staff and I didn’t own any black shoes (when I left school I swore that I would never wear black shoes again!).

My head of department in shoes was a Miss Lewis, a remarkable woman who had worked for Cavendish House all her life. When she started work as a girl she lived-in in the staff quarters in the basement. This later became the electrical department and now men’s fashion and travel goods. The only light the girls had into the dormitory was from the small windows at pavement level on Regent Street. If the girls had been allowed out in the evening and if they were late back to the dormitory, they had to climb into the basement through one of the windows, and as they crept back to their beds they would disturb the cockroaches on the floor. Well, that was what she told me.

While I worked there I bought my first bow tie in the sale, a square ended yellow multi-coloured self- tie bow tie. After I left Cavendish House for college and work, and as I progressed in the laboratory hierarchy, it quickly became evident to me that I would never be famous for the erudition of my science. But I was known by the Director of the Establishment as the chap with the bow tie. From that time on I never wore a straight tie again. I don’t even own one to this day, but I still have about three dozen different self-tie bow ties.