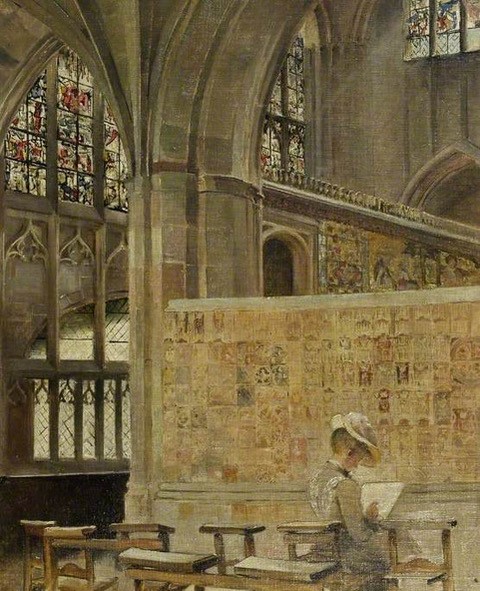 Malvern Abbey  (strictly speaking, Great Malvern Priory) is one of the most beautiful and stately churches in England: the unadorned Norman arcade of great drum columns and unchamfered arches lead the eye down the Nave, onwards through the late medieval Crossing and Choir, to the great East window above and behind the High Altar. Your first impression is of height and space. So it is strange that the artist of this painting, the American Sarah Paxton Ball Dodson, should have set her easel in the most cramped and complicated corner of the entire Abbey.

Here, at the furthest corner of the north Choir aisle, eight wooden chairs face a decorated parclose wall. Beyond this, at an angle, can be seen part of the stone panelling behind the High Altar, which is hidden from sight. These are horizontals; vertically, however, the centre of the painting is dominated by a great column from which springs (to the right) the lower part of an arch and (to the left) the ribs of a vaulted ceiling over the aisle where the artist stands to paint.  Or sits, perhaps, for the woman who sits on one of the chairs and wears a rather jaunty white summer hat is evidently drawing; her body is turned slightly so that, though we cannot see her face, we can see she has a sketch pad propped on her knee. 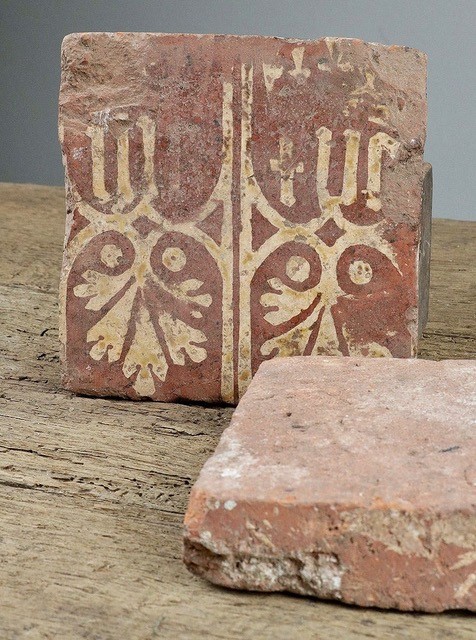 What she is drawing appears to be the wall directly in front of her. And well she might be, for it contains one of the Abbey’s prize possessions, part of its remarkable collection of 16th century encaustic inlaid floor tiles, reassembled for display on this wall. These tiles were probably made within sight of the Abbey, for Malvern was once a famous centre for the production of patterned tiles. And their patterns ranged from simple geometric or stylised shapes to complex heraldic designs and animals of mythical creatures. (See my description of a symbolic bull in an inlaid tile belonging to The Wilson, the News Update for January 2021.) I think it no small achievement that in this oil painting Sarah Dodson was able to give a faithful impression of this wall of tiles, even suggesting the outline of one or two patterns or some of the different glazes.

Malvern is famous too for its 15th century glass, and Dodson has given an equally vivid impression of the glass in the East window, and of midday sunlight streaming into the Abbey through the high clerestory window in the top corner of the picture.  An expatriate who lived most of her adult life in Europe, Sarah was particularly admired in her lifetime for her landscapes. You can find her view of the Malvern Hills, also painted during her 1892 visit to Worcestershire, here, on the ArtUK website. But for all her evident pleasure in the English outdoors, I can’t resist this painting of a corner of Malvern Abbey with (as I like to hope) the artist herself, the American lady slightly off-centre, absorbed in her sketching.