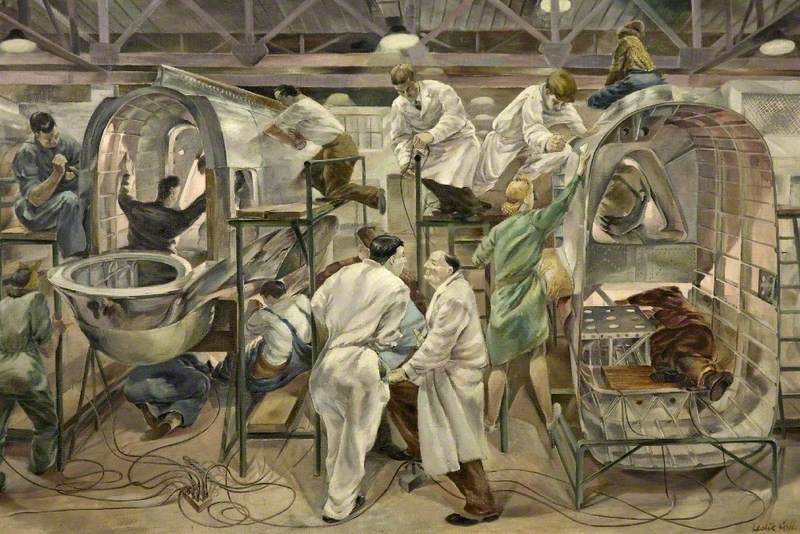 Leslie Cole (1910-1976) was an artist and art teacher, who deserves to be much better known for his remarkable work as an official war artist between 1942 and 1946.  The Wilson is very fortunate to own Stirlings in Production, donated to the Cheltenham Art Gallery and Museum by Sir Kenneth Clark’s War Artists Advisory Committee.

This painting shows men and women at work on the tail planes of the Short Stirling, Britain’s first four-engine bomber aircraft.  Cole had enlisted in the RAF in 1939 but was later discharged on grounds of ill-health.  It is likely that this painting was painted in the Altona workshop of Short Harland, near Lisburn (Northern Ireland). Two tail-planes are under construction: the left-hand one is nearer completion, with the bowl-like housing for the rear guns already in place.  A wartime photograph of a Stirling’s fuselage being transported on a low loader clearly shows how these sections fitted onto the bomber’s main structure.

So far, therefore, so accurate.  Cole was fulfilling the war artist’s mandate to show how people at home were contributing to the war effort, and in this picture at least fifteen people, including two women, are shown building and fitting out the tail-planes.  Some of the men are wearing boiler suits; others, dungarees.  Nearly all of them are absorbed in their work.  Two are wearing white coats – foremen probably, though the one in the front might be a manager, or even a director.  Look closely at his feet: over his shoes he is wearing spats.  His expression suggests he is about to lose patience with the workman sounding off at him.

Meanwhile the woman in a boiler suit, her hair tied in a scarf like a factory girl, is pushing hard to move a platform on which one of the men is sitting; the other woman, wearing a short coat and with her hair gathered at the neck in an elegant snood, balances neatly as she stretches to assist the workman above her.  Perhaps the artist simply wants to show how all classes have come together with a shared purpose, indeed they seem bound together by the maze of cables snaking across the canvas; perhaps, though, he could also be showing how even if the purpose is shared, social and gender distinctions remain.

At the end of the war, Cole was sent to record the horrors of Changi Gaol in Singapore and the liberation of Bergen-Belsen in Germany. His depiction of the Women’s Compound at Belsen, painted in 1945 within days of the liberation of the Camp, had a profound impact on British and American public opinion.  Most of these paintings are now in the Imperial War Museum, where they provide an unflinching testimony to the inhumanity of war.

For the rest of his life, Leslie Cole taught at Brighton College of Art and at the Central School of Arts and Crafts in London.  A major exhibition of his work, To the Front Line, was held at the Imperial War Museum in 1986 but today he is a largely forgotten figure, his work as a war artist currently overshadowed by contemporaries such as Eric Ravilious.  He deserves to be rediscovered.  Stirlings in Production, his one painting owned by The Wilson, is a good place to start.