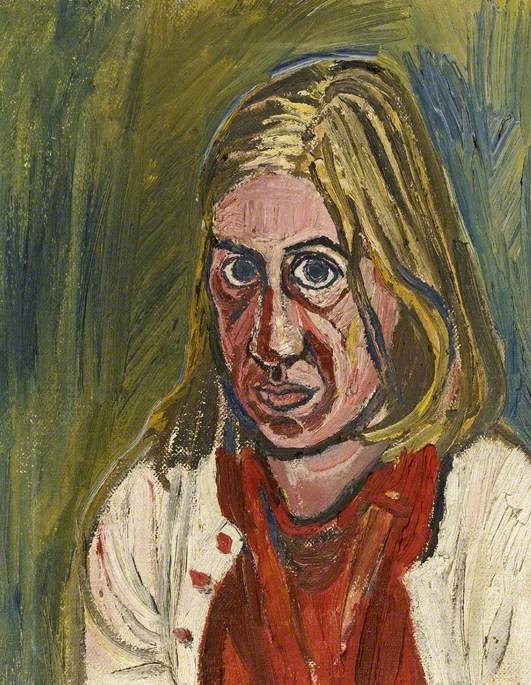 When browsing artworks from The Wilson featured on the Art UK website, one portrait grabbed my attention.  The painter is clearly not of the ‘flattering the sitter’ school.  Large soulful eyes have a hypnotic effect.  The stare is direct but unnervingly unfocussed.  Is she scared or scary?  She looks formidable.  The painting style is confident, bold, crude, fast?

Bratby’s story seems to come straight from the pages of a drug-fuelled novel.  He was the son of a wine-taster and, in his youth, was a bun-reselling entrepreneur, a writer and paid reader of pornographic stories and a trainee boxer.

His response to post-war austerity was to develop his own style of realism.  At college, his extreme shyness led to him spending his grant money on prostitutes and ending up sleeping rough.

Some stability came into his life when, in 1953, he met and married fellow student Jean Cooke, a sculptor and potter who became a highly esteemed painter.  She painted a number of self-portraits.  It was a tempestuous relationship; he once locked her in her room during their courtship because he feared that she would leave him.  Later his jealousy of her success resulted in him painting over or slashing her work and restricting her painting time.  He was also abusive, unfaithful and an alcoholic.  They had a daughter and three sons.  The relationship ended in the 1970s and they divorced in 1977.

Bradby has been described as Britain’s first modern celebrity artist, bridging Augustus John and David Hockney.  In 1954, John Russell, then art critic of the Sunday Times, compared Bratby’s rendition of a cornflake packet with Velazquez’s Rokeby Venus and Studio Magazine classed Bratby with Rembrandt, Goya, Courbet and Manet!  John Berger likened Bratby’s obsessive vision to that of the prisoner in the condemned cell, seeing life for the last time.  Along with Edward Middleditch, Jack Smith and Derek Greaves he was termed a Kitchen Sink painter.  They were a group of British social-realist artists who paralleled the literary Angry Young Men of the 1950s.

Bratby was particularly known for the feverish speed at which he worked and for the thick texture of his vividly coloured, Expressionistic paintings into which he often incorporated everyday objects.

However, he fell out of fashion as abstraction and Pop Art took over.  The critics reversed their judgements – Berger accused him of selling out to materialism – pouring scorn on or ignoring his work.  However, he remained prolific and his work was still popular with the public.  In 1966, he painted the entire cast of Coronation Street for the cover of the TV Times.  In 1971, he was elected to the Royal Academy of Arts.  He was also the author of a number of lurid, autobiographical novels.

He painted over 1500 portraits including many of celebrities: a young Paul McCartney, Arthur Askey, oddly surrounded by nasturtiums, Michael Palin, Spike Milligan, Billie Whitelaw, Claire Rayner, Tom Bell, Lord and Lady Attenborough and the Queen Mother.  When a bit hard-up for money, he wrote to some celebrities and politicians inviting them to sit for him, with mixed success.  Neil Kinnock turned him down and Ian Mikardo, the Labour MP, was certainly not impressed, writing “the second paragraph of your letter is a monumental piece of flatulent Neanderthal nonsense.”

At the end of his life, he lived for over a decade in Hastings. He died in 1992 on his way back from the chippie. Perhaps appropriate for a man who once painted Still Life with Chip Frier.