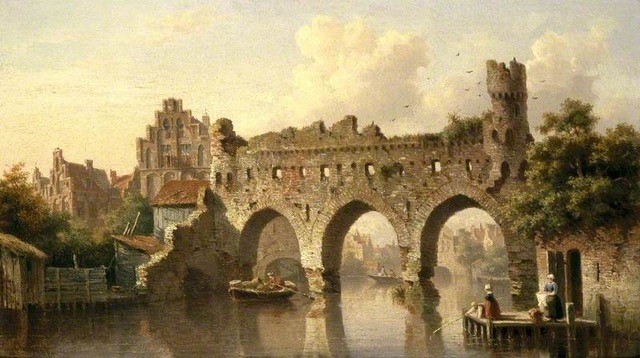 Zutphen is a Dutch city in the province of Guelderland. Until the 18th century the Ijssel, one of Holland’s major rivers, formed the historic eastern boundary of the city, while the smaller Berkel formed a defensive loop around the old town. The ruins depicted in this painting are the remains of the 15th century Berkelpoort, one of the two gateways across the River Berkel (modern spelling) that once guarded the entrance into Zutphen itself.

This painting is by the 19th century Dutch artist, Everhardus Koster (1817-1892), who made his reputation as a specialist in maritime and river scenes. And not only in Holland: his paintings of the Thames (including a bravura imagined spectacle of Viking ships arriving and mooring anachronistically opposite the Tower of London) had considerable popularity in their day and even now attract good prices at auction.

Among his earliest collectors was the third Baron de Ferrières (1824-1908), whose initial gift in 1898 of 43 paintings (chiefly 17th and 18th century Dutch and Flemish art) forms the basis of The Wilson’s fine art collection. The Baron was evidently much attached to his Koster paintings: although in his lifetime he gave two to the V&A, he did not include any in his gift to Cheltenham, keeping them for himself and bequeathing them instead to his family. The six paintings now in The Wilson’s collection were given by his great niece, Miss Ethel Roberts, in 1965.

The artist has taken some considerable liberties to create this picture. True, the architectural details of the bridge – turrets, dentilated brick d 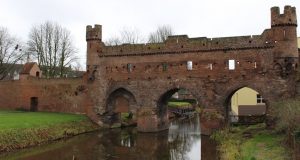 ecoration and the openings above the arches – are all accurate when compared with the bridge in its present, over-restored state; however, the arches themselves have been heightened and widened so that the eye can be drawn through them to the distant roofscape seen as it were in an afternoon haze. The river itself, though narrower now than it must have been when the bridge was built, has been significantly widened by the artist, and the towering brick buildings on the left of the picture tower because they stand on impossibly rising ground.  ‘Zutphen’ itself means ‘southern fen’; topographically, the city should be low-lying.

At first glance this painting could as well belong to the 17th as to the 19th century. The arches of the ruinous bridge are reflected sharply in the water that is apparently undisturbed by the Berkelzomp – a narrow flat-bottomed boat long associated with Zutphen – which here seems quite static: the oar doesn’t even break the surface of the water. The children on the jetty and the washerwoman behind them similarly appear frozen in time. Even the birds seem to hover suspended in mid-flight. Nothing moves, yet Time has watched both the gradual collapse of this monumental arched gateway – larger now, as the artist has seen it, than ever it was in reality – and the erection of the great step-gabled buildings in the middle distance.

Koster, the artist, was not the first person inspired by Zutphen to contemplate the ruins of time. When Sir Philip Sidney was fatally wounded at the battle of Zutphen in 1586, the death of this scholar and poet, politician and soldier prompted an outpouring of stories designed to present Sidney as the epitome of chivalry. These were quickly spread by the social media of the day. The famous tale that while he lay dying on the battlefield at Zutphen Sidney gave his water bottle to a wounded foot soldier, saying ‘Thy necessity is yet greater than mine’, may well be apocryphal. It is nevertheless illustrated in the 1923 ‘Fortitude’ window of Cheltenham College Chapel, where Sidney appears alongside Edward Wilson.

Sidney actually died (aged only 31) of gangrene at Arnhem, almost four weeks after the battle. His body was brought back to London and his funeral procession to St Paul’s cathedral was one of the most extravagant pageants that had ever been staged in the City. Yet this grief, no doubt deeply felt but carefully stage-managed, was followed by much reflection on the transience of fame and the mutability of all things. In The Ruins of Time, a long lament published five years after Sidney’s death, the poet Edmund Spenser asked:

In the same vein Spenser later spoke of a great bridge, finer even than Trajan’s Arch, which ultimately collapsed:

But (ah!) what boots it to see earthly thing
In Glory, or in Greatness to excel,
Sith Time doth greatest things to ruin bring?

It may be no more than coincidence that the poet of The Ruins of Time and the artist of Ruins over the River Birchel, separated by 300 years, both use the same image of a ruined bridge; but it is Zutphen – location of the Berkelpoort and site of Sidney’s last battle – that connects them.