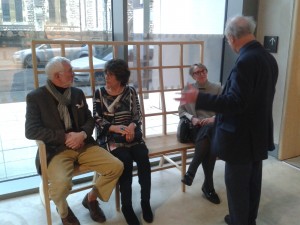 John Beattie, Jenny Ogle, Fran Beattie and Douglas Ogle from the Friends try out the bench

The Friends Bench has now been installed in the foyer at The Wilson. The bench was a gift from the Friends to The Wilson to celebrate our 30th anniversary in 2014.

The bench was designed by Chris Eckersley and made by Dave Green of Sitting Firm. Its design draws inspiration from both The Wilson’s Arts & Crafts Movement collection and its Antarctic collections. The English ash that makes up the frame of the chair was carefully sourced from woodland in nearby Herefordshire, while the elm for the seat came from a sustainable plantation in Scotland. These are traditional chair-making materials, and echo the traditions that both Eckersley and Green draw on in their work.

Chris Eckersley trained at Gloucestershire College of Art. During a career spanning forty years he has designed for manufacturers and retailers such as Heal’s, the Conran Shop, Lloyd Loom and Liberty, as well as undertaking bespoke commissions for individual clients here and in the United States. Chris received The Prince’s Medal from HRH The Prince of Wales at the V&A Classic Design Awards in 2002, and more recently a Design Guild Mark from The Worshipful Company of Furnituremakers. He is a Fellow of the Royal Society of Arts.

For The Wilson Bench, Eckersley first produced a series of sketches and drawings before making a full size prototype which members of the Friends committee were able to view, try out and sit on. Wishing the bench to encompass the very best of traditional and contemporary chair-making, Eckersley invited Sitting Firm – the UK’s leading craft-based chair-makers – to assist in the making of the final piece. Sitting Firm was set up by master craftsman Dave Green, and has developed an international reputation for producing traditional chairs. 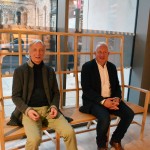 Asked about his inspiration for the design of the bench Eckersley says ‘I’d like the compound curves of the bench’s back to have the feel of a billowing sail – from the ‘Terra Nova’ maybe – with the grid construction referencing some of the Arts and Crafts furniture in the collections held by The Wilson. A further nod to Sidney Barnsley and Ernest Gimson is the chamfer detail to the back, and the arched effect to the top rail. Having said that, this is a modern piece and something, I hope, that will be well-used by present and future generations of visitors to The Wilson.’