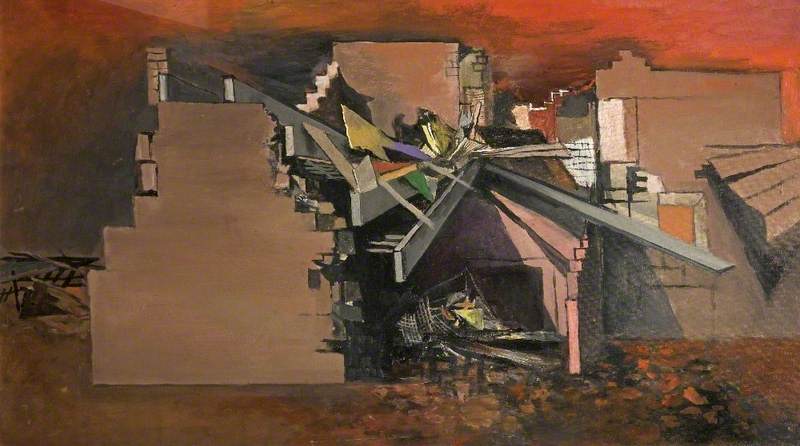 Choosing a ‘Favourite’ painting is always difficult – particularly for a Curator who knows the painting collection of which only a small percentage is on public display. In one sense I have played safe, choosing a work which is on public display – in the ‘old museum’. I have also always been uncomfortable about ‘liking’ a painting – what does one mean by ‘like’? So with these two qualms in mind I have opted for Graham Sutherland’s Devastation, House in Wales, painted around 1940.

When I first came across this painting, in 1973, on first taking up the post at the Art Gallery and Museum, my initial reaction was a combination of the joy of having a work by a major modern British artist and an emotional horror at the scene depicted, or interpreted. That horror was because it brought back to me my personal experience of the devastation and suffering of WW2 bombing.

I remember vividly a particular experience – travelling with my family, I was about six years old, from Bolton to Sheffield to see my grandparents. Bolton had not suffered particularly badly from bombing as the German planes flying over were heading for Manchester and Liverpool. Occasionally they jettisoned bombs on their return but caused relatively little damage or carnage.   Travel, by a very crowded train, from Lancashire to Yorkshire was, for safety reasons, by the longest route through the Pennines, the Woodhead Tunnel. On this occasion, when we stepped off the train in Sheffield, I was immediately struck by an eerie silence and a strong acrid smell from plumes of smoke amidst devastated buildings which I had known as shops, offices, public buildings and houses. Overnight the centre of Sheffield and the massive steel works surrounding the city had been severely bombed.

This painting hit a nerve. As a Government commissioned War Artist, chosen by Sir Kenneth Clarke, Sutherland went around the country recording, quite deliberately, scenes of bombing damage outside London – in this case to the industrial areas of south and mid Wales. As an adult, studying art history and then on to Curatorship, I had seen many types of depictions of war damage – most of them realistic, almost topographical, works.

This work is of a different order completely. In this work, small as it is, the artist has used his ‘advanced’ abstract methods to really reveal, almost physically, the feeling of a bomb dropped INTO a house – forcibly destroying the fabric and ‘soul’ of an innocent building and its occupants. The artist does this by his use of line, form, and colour in a powerful and unnerving way. One can feel the impact of the bomb as it forcibly and suddenly thrusts itself into the building, destroying everything around; the strong and forceful lines of the composition, the sharply angular forms, and the vivid clashing colours with more sombre tones. Nothing moves, nothing is living. There is silence – with the possible occasional sudden fall of fractured masonry.

This is a work which is not to be passed by casually – but visually studied and explored.