Home »Artworks from The Wilson Collection – Review and Responses »An Interior (c. 1910), by Leonard Campbell Taylor 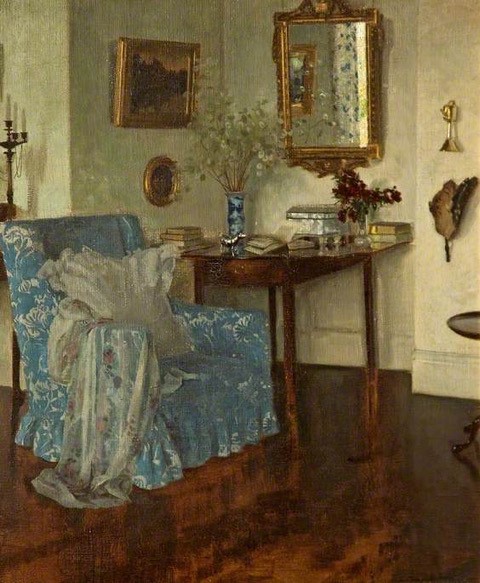 An empty corner of an apparently well-furnished room: empty, at least, in as much as it seems someone has left the chair she has just been sitting in – the pages of her open book flap open on the table; she, because of all the ‘props’ in the picture – the lacey pillow, the diaphanous material draped over the arm of the flowery chintz-covered armchair, and the silver pin cushion in the shape of an animal, a cow.

The furniture seems to float on a sea of highly polished floorboards: it is hard to tell precisely where the legs of the mahogany Pembroke table meet the floor, and a wine table with cabriole legs drifts out of the picture to the right. After brown, blue is the dominant colour. The sharp line of the chair’s back points to the blue and white of the Chinese vase with its generous display of Honesty (Lunaria Annua ‘Corfu Blue’) reflected both in the mother-of-pearl workbox on the table and in the curtains glimpsed in the mirror. And then there is gold – the gilded frames of the pictures and the glass, the curious object hanging on the wall above the equally curious fan, the gilt-edged pages of the book at the back of the table. Is this perhaps a bible, its red silk bookmark just visible?

Everything seems arranged for the comfort and convenience of the chair’s missing occupant. But will she be coming back? Empty chairs in art sometimes stand in for the person who usually occupies it – or used to do. One of the most popular paintings of the Victorian era was ‘The Empty Chair, Gad’s Hill – Ninth of June, 1870 – Digital Collections – Free Library’, depicting the empty chair at the desk of Charles Dickens, supposedly on the day he died. Given that title, there could be no doubt that the usual occupant would not be sitting there again.

There can be no such certainty, however, about the usual occupant of the blue chair. The title of the painting, donated in 1928 to The Cheltenham Municipal Art Gallery and Museum (as it was then called), gives nothing away: it is simply catalogued as ‘An Interior’ and was painted c.1910. But at least one can infer that the occupant, whoever she might be, is a woman of good taste, leading a self-contained life. Her activities are those of a retiring Edwardian lady – needlework, probably; reading, certainly. She is no Lady of Shallot, longing for the excitement of the outside world and gazing into her mirror to catch sight of what goes on below her tower; with her chair angled as it is, she looks neither out at the window nor up at the mirror.

The artist of the painting, Leonard Campbell Taylor (1874-1969) was a pupil at Cheltenham College who went on to study art at the Royal Academy Schools and eventually became a Royal Academician himself. He enjoyed the reputation of being ‘the English Vermeer’ – which may be putting him on rather too high a pedestal – but he was well known as a society portrait painter, Queen Mary herself being his most distinguished sitter. There is an excellent three-minute YouTube video compilation of Taylor’s works, which shows the surprisingly wide range of styles he adopted during his long career. Many of his paintings are indeed interiors, but only two (of which The Wilson’s picture is one) depict an interior entirely devoid of people. The other one, untitled, can be found on the website of art dealers Messum’s: 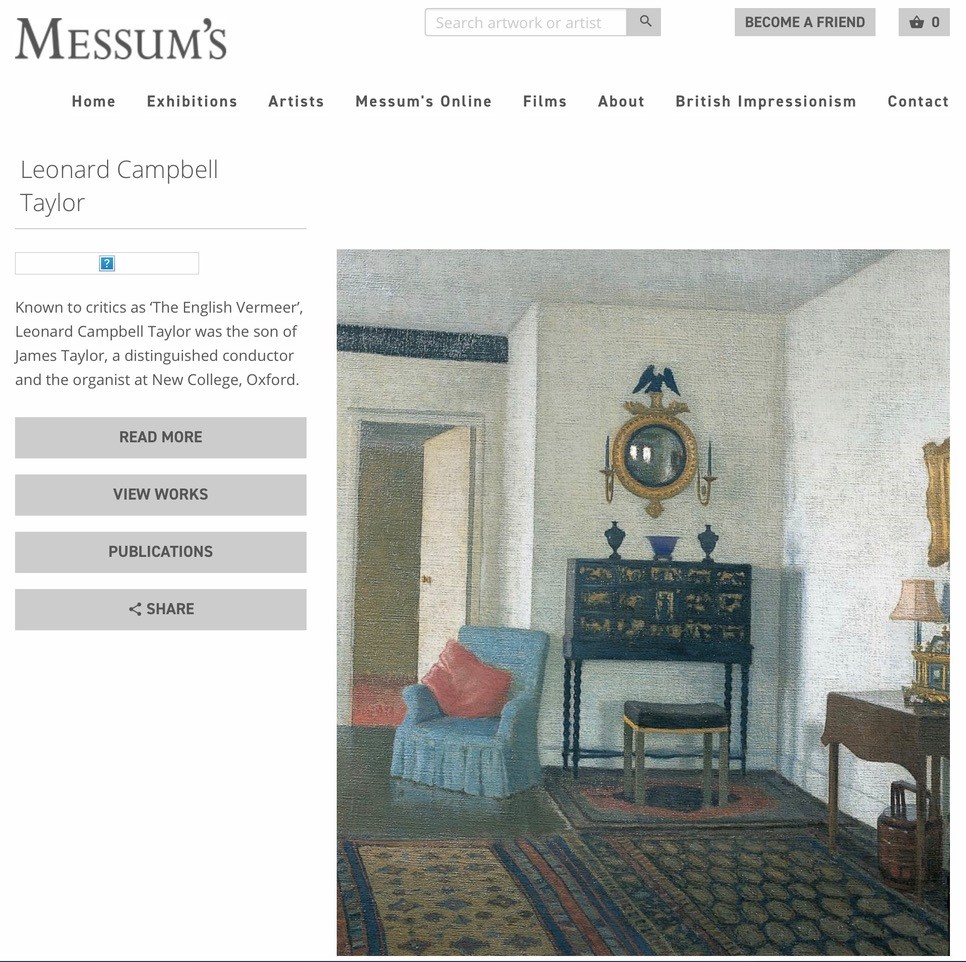 These two are worth comparing and contrasting. For a start, they are markedly different in style. The high polish, intimacy and extreme detailing of the space depicted in The Wilson’s painting is at odds with the cooler, unvarnished and emptier appearance of the room in the second picture: this is not a room someone has just left. On the other hand, there is something disturbingly familiar about the unusual shape of the two rooms and about the two blue armchairs. Then compare the items on the Pembroke table with other items seen in the various paintings in the YouTube video: the Chinese vase makes a second appearance, and the mother-of-pearl workbox pops up no fewer than three times more. The Federalist mirror in the second picture likewise appears elsewhere in other rooms in other paintings. Faced with the evidence of such comparisons and contrasts, it becomes clear that The Wilson’s picture is not quite – perhaps not at all – what at first it seemed to be.

So one has to ask, does this painting depict an actual room, or is it a really just a stage set, ‘dressed’ by the artist to create the illusion of such a room? Certainly there is a kind of trompe l‘oeil at work here. What we thought we were invited to believe was a careful representation of a real interior – the comfortable corner of a sitting room, one usually occupied by a woman of a certain age – could equally be seen simply as an assemblage of objects carefully arranged to create a large-scale still life.

Perhaps then, given these two irreconcilable ways of describing the painting, its catalogue title should more accurately read ‘An Interior: Still Life?’ Wouldn’t that cover all possible readings of this fascinating, but now strangely unsettling, picture?